Cheryl Wing-Zi Wong’s work investigates the transformation of space over time. She explores how spaces can perform on varying scales, ranging from smaller scales such as shelters and surfaces that accommodate the body, to larger spaces that extend their reach to entire environments. Her work questions the social implications of space through audience-sensitive architectural interventions, in which harnessing public interaction is integral.

When physical elements in architectural spaces perform and change, they also dictate changes in behavior. How do we perceive and react to difference? How do we register change over time? How can race, sex, and politics become embedded in architecture, and how is space negotiated? Cheryl’s creative process is a crossover between digital drawing (using tools such as mapping, architectural drafting software and 3D modeling), visual experiments, and the construction of spaces. Her work has been published Domus Magazine, LA Times, Triple Canopy, Bijutsu Techo, Dezeen, Designboom, Dwell, Interior Design Magazine, Architizer, GSAPP Books, and Design Observer.

Born and raised in Los Angeles, Cheryl received her B.A. in Art and Italian at the University of California at Berkeley, studied sculpture at the Accademia di Belle Arti di Brera (Milan, Italy), and earned her Master of Architecture from Columbia University GSAPP. Cheryl has lived and worked in Milan, Hong Kong, Berlin, New York, Berkeley, Macau, and Bangkok. Cheryl’s work has been commissioned by the New York City Parks Department, the City of Inglewood, the Washington DC government, and the New York State Thruway Authority, among others. Her work has been exhibited at Triangle Arts Association, the New York Foundation for the Arts, the Istanbul Design Biennial, Usagi Gallery, Taliesin West, the Venice Biennale of Art, BMW-Guggenheim Lab, Columbia University GSAPP, Berkeley Art Museum, and Museo della Permanente (Milan, Italy), among others.

Cheryl has been a visiting critic at Columbia University and the Parsons School of Design, and in recent years, a professor at the International Program in Design & Architecture (INDA) at Chulalongkorn University in Bangkok, Thailand. She is a co-founding partner of design practice WITH.

Get to know Cheryl Wing-Zi Wong

Art and culture have the power to transform our cities and communities. Art can be galvanizing, and can create new meaning for a community. It can generate greater awareness and new social dynamics within a space, and can be, simply put, empowering for a place. It’s beneficial for all of us in the greater public to have much wider access to experiencing art and culture in everyday settings, during everyday walks and everyday errands. It’s wonderful when art can simply become part of our daily lives.

What motivates you to do what you do?

In my exploration of impermanence, an important part is choreographing situations — through transformations via site-specific spatial interventions– that harness public interaction. Architecture, at the scale of small objects as well as large buildings, affects the way we behave and the way we interact with each other. In my practice, I am interested in investigating how race and sex become embedded in architecture, and I am also interested in cultivating awareness and understanding to the way spaces change and the way they change us.

Cheryl Wing-Zi Wong
2022
Reflective Urbanisms: Mapping NY Chinatown is a storytelling project by Cheryl Wing-Zi Wong about Manhattan’s Chinatown community, as told through its built environment. The project will map Chinatown through changes the buildings and streets have undergone over time, and through community stories about the activities that took place there. 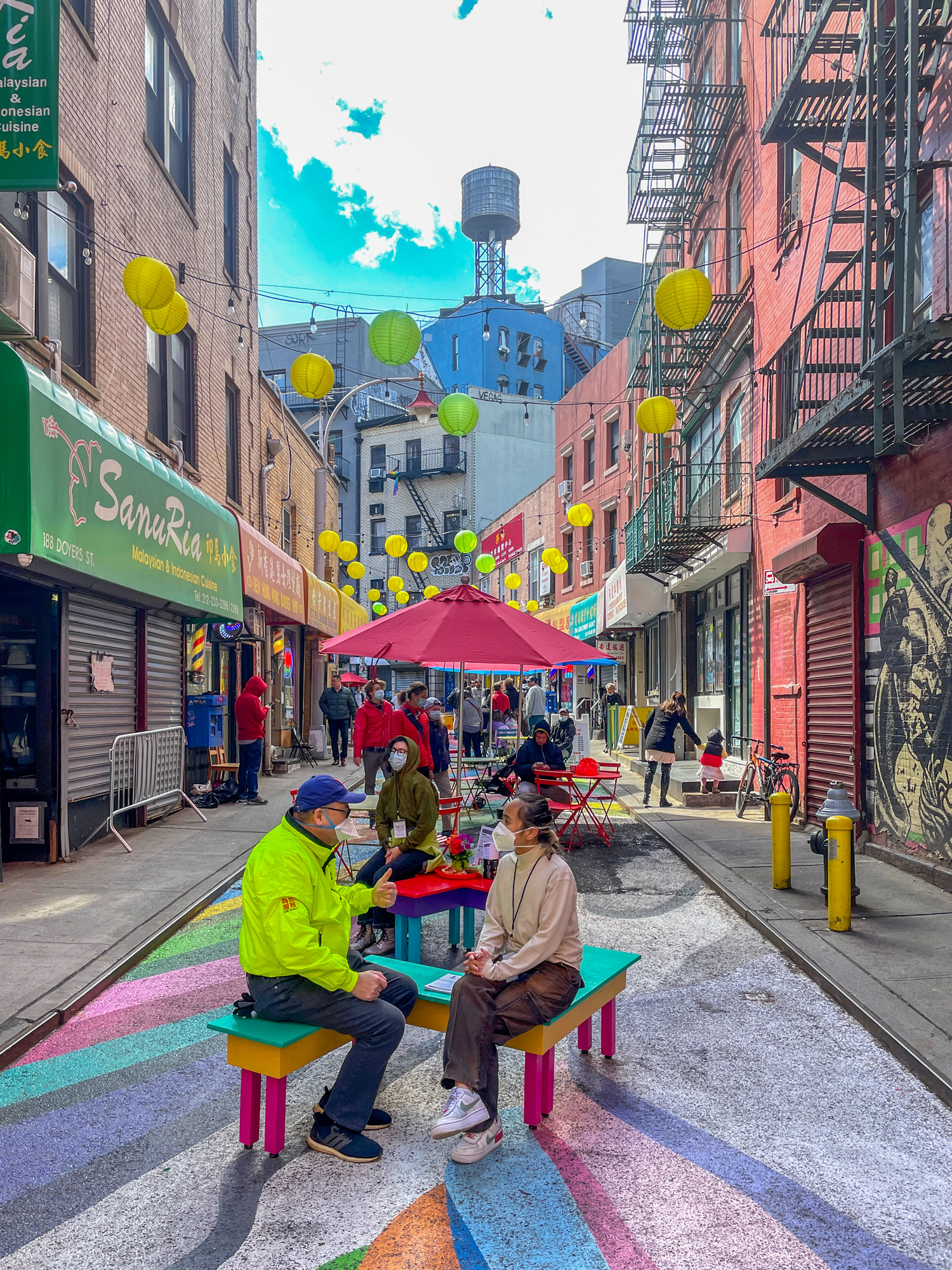